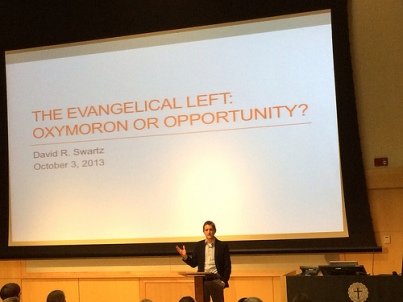 If you would like me to speak at your college or civic group, please contact me here.

“Global Encounters: The Evangelical Left and the Limits of Ecumenism,” invited workshop on “Ecumenical Protestantism and Post-Protestant Secularism” at the University of California, Berkeley, Cal. (October 13, 2017)

“Miracle in Almolonga: Supernaturalism and the Re-Enchantment of the West,” Organization of American Historians, New Orleans, La. (April 9, 2017)

“Peter Wagner, Global Encounters, and the Re-Enchantment of the West,” Conference on Faith and History, Virginia Beach, Va. (October 21, 2016)

“More with Less: What a Cookbook Can Tell Us about Religious Culture in the 1970s,” Asbury University (March 8, 2012)

“What the History of the Evangelical Left Can Tell Us about the Future of Social Conservatism,” Claremont McKenna College, Claremont, Cal. (May 20, 2011)

“The Evangelical Left and the Move from Personal to Corporate Responsibility,” Colloquium on “New Perspectives on American Evangelicalism in the 1960s: Revisiting the “Backlash,” Keele University, Stoke-on-Trent, United Kingdom (April 16-19, 2011)