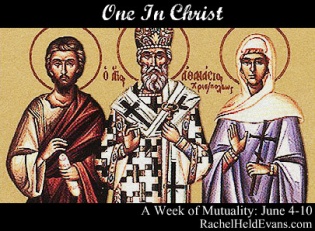 Young egalitarian evangelicals this week are observing a “week of mutuality.” Here’s the concept and schedule. And here are a couple of interesting posts so far.

This kind of evangelical feminism isn’t new; it has roots in the evangelical left of the 1970s. Part of a larger group of progressive evangelicals who questioned American imperialism, racism, and materialism, a small group of women pushed for a line that denounced sexism in a document called “The Chicago Declaration” (1973). A year later these evangelical feminists (including a couple of men) launched the Evangelical Women’s Caucus. Their mission hit quite a bit of resistance. Nancy Hardesty and Letha Scanzoni struggled to publish a book, All We’re Meant to Be, that was rejected by six evangelical publishers in three years. This book (which was finally published!) and a growing oeuvre of evangelical feminist literature marshaled a lot of the exegetical work many now cite in the “Week of Mutuality”–and did so with winsomeness and wit. Check out these lines:

The following excerpt from my forthcoming book Moral Minority tells the story of Sharon Gallagher, a student at Westmont College and member of the Christian World Liberation Front (CWLF):

Perhaps most telling regarding the egalitarian claims of third-way evangelicals was their treatment of women. Gish encouraged married men to stay home to raise children while women entered the workforce. He advised men to wash dishes and women to fix cars in order to break down hierarchies of vocation and gender. Sharon Gallagher, after reading Betty Friedan’s Feminine Mystique, began to resent mail addressed “To the Editor. Dear Sir.” Or to Mr. Sherren Gallagher.” Such slights led Gallagher, like early leaders of NOW also inspired by Feminine Mystique, to create consciousness-raising groups. She also successfully agitated for women elders in CWLF and occasionally refused to take notes in meetings. In feminism, Gallagher “found a name for the anger, rebellion, and loss of sense of self I had felt in college. As I reread the Bible, whole passages of Scripture became clear to me in new ways. I discovered passages that I had never heard theologized upon by male theologians.” Gallagher, along with several other converted women angered over alleged sexism in CWLF, successfully agitated to allow women to lead ministries and preach. Newly committed to “biblical feminism,” she also helped launch the Bay Area Evangelical Women’s Caucus and Green Leaf, its monthly newsletter, and joined secular feminist protests as a “co-belligerent.” Carrying signs reading “Jesus Was a Feminist” and “Worship God, Not Your Husband” at the 1975 United Nations-sponsored International Women’s Year conference in Mexico City, Gallagher’s commitment to “biblical feminism” extended the egalitarian impulse within CWLF.

As I researched Gallagher, evangelical feminism, and the rest of my book manuscript, my wife Lisa and I ourselves were negotiating tricky gender roles. In August 2005 we were delighted–and surprised–to discover that Lisa was pregnant. In October Lisa applied to Ph.D. programs in sociology. In November we discovered we were having twins. In January she learned she had been accepted to grad school at Notre Dame. In March Andrew and Jon were born. In August Lisa began taking her first classes. Also in August I began staying at home to care for our babies. I wrote my dissertation manuscript during their naps and late at night.

As you can imagine, that year was a roller coaster as we went from zero to one to two children and from one to two graduate programs. Were we were crazy to give it a shot? Would this jeopardize my fledgling academic career? Several concerned friends and family wondered if we were confusing biblical gender roles. But as Lisa and I talked and experimented and adjusted, we always came to consensus. It hasn’t always been easy, and a couple of years ago Lisa took a sabbatical from her program as I began a tenure-track job. But now that my schedule has relaxed, she’s restarting her program, and I’ll be watching our children (there are four now!) much more. 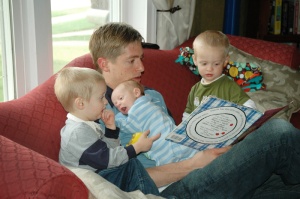 Six years later, we’re glad we did what we did. We’ve both sacrificed and pursued career ambitions. We’ve both flourished as stay-at-home parents. And our children have watched both of us changing diapers, washing dishes, studying books, and leaving home to work. Most important, they’ve watched each of us respect each other in a marriage of mutuality. The examples and writings of Gallagher, Scanzoni, and Hardesty in the 1970s gave us the courage and logic to give it a shot.

5 Replies to “Evangelical feminism, the 1970s evangelical left, and one couple’s journey toward mutuality”

Leave a Reply to suzannah | the smitten word Cancel reply