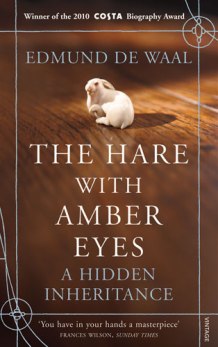 Before reading this book, I had never heard of netsuke, which are intricate miniature ornaments, usually carved from wood or ivory and representing people, animals, the professions, mythical creatures, and sexual acts. Worn to hang items from a kimono (which have no pockets), they reflect the rich culture of seventeenth- and eighteenth-century Japan.

In 2005 Edmund DeWaal, a potter from London, inherited a collection of 264 netsuke from his uncle Iggie. The netsuke, it turns out, had traveled a long, winding journey to London. Iggie had possessed them for decades in Tokyo. Before that the collection survived in a mattress, undiscovered during the aryanization of Jewish properties in Vienna during World War II. Before that, the collection was assembled by Charles Ephrussi in Paris during the Japonisme obsession in Western Europe in the late nineteenth century. In total, the netsuke had a history that spanned five generations of Ephrussis from 1871 to 2009.

But DeWaal didn’t know any of this when the netsuke came into his possession. The Hare with Amber Eyes is DeWaal’s sobering and delightful project of historical recovery. What he finds in his family history reveals a sweeping, panoramic view of nineteenth-century European history. It’s a primer on the migration of Jews from the shtetls of Ukraine to the glistening cities of Western Europe, on the devastation of the Holocaust, on the fascination of Western elites for Eastern culture. The sources from this literate, wealthy, and connected dynasty give the book amazing texture.

Most profoundly, The Hare with Amber Eyes is a search for identity. DeWaal travels to London, New York City, Toyko, Odessa, Vienna, and Paris. In Odessa, for example, he is taken by the city’s exquisite texture. But then he realizes “that in all my enthusiasm about tactile responses to Odessa I have mislaid its reputation as a city of pogroms, a city you might wish to leave behind.” DeWaal wonders if he really wants to recover this emerging narrative of extravagant living, extramarital affairs, and genocide. “Losing things can sometimes gain you a space in which to live. I don’t miss Vienna, Elisabeth would say, with a lightness in her voice. It was claustrophobic. It was very dark.” Later he writes, “I think of all those careful burnings by others, the systematic erasing of stories, the separations between people and their possessions, and then of people from their families and families from their neighborhoods. And then from their country.”

It’s also a narrative about place and belonging. Is it ok to bring the netsuke to his home in a Edwardian house on a pleasant London street far, far away from their history in Vienna, Paris, and Japan? In the end, DeWaal decides it is permissible. After all, “objects have always been carried, sold, bartered, stolen, retrieved and lost. People have always given gifts. It is how you tell their stories that matters.”

Which is what De Waal has done so compellingly. “I put some of the netsuke out on display—the wolf, the medlar, the hare with amber eyes, a dozen more—and when I next look they have been moved around. A rat, curled up asleep, has been pushed to the front. I open the glass door and pick it up. I slip it into my pocket, put the dog on the lead and leave for work. I have pots to make. The netsuke begin again.”

The book—beautifully composed, compellingly conceived, narratively tight—is unsettling too. It is an upbeat horror story with lots of emptiness, loneliness—seemingly redeemed because the stunning netsuke have survived to another generation. This narrative about ultimate things that features a dearth of religion and a striking abundance of good taste left me wondering: Is aesthetics all there is?